The Child Thief by Brom 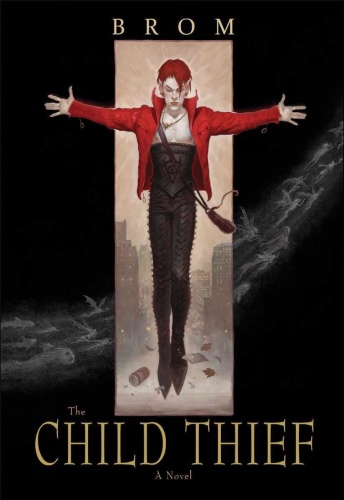 ​
Descirption: Peter is quick, daring, and full of mischief-and like all boys, he loves to play, though his games often end in blood. His eyes are sparkling gold, and when he graces you with his smile you are his friend for life, but his promised land is not Neverland. Fourteen-year-old Nick would have been murdered by the drug dealers preying on his family had Peter not saved him. Now the irresistibly charismatic wild boy wants Nick to follow him to a secret place of great adventure, where magic is alive and you never grow old. Even though he is wary of Peter's crazy talk of faeries and monsters, Nick agrees. After all, New York City is no longer safe for him, and what more could he possibly lose?
There is always more to lose.
Accompanying Peter to a gray and ravished island that was once a lush, enchanted paradise, Nick finds himself unwittingly recruited for a war that has raged for centuries-one where he must learn to fight or die among the "Devils," Peter's savage tribe of lost and stolen children.
There, Peter's dark past is revealed: left to wolves as an infant, despised and hunted, Peter moves restlessly between the worlds of faerie and man. The Child Thief is a leader of bloodthirsty children, a brave friend, and a creature driven to do whatever he must to stop the "Flesh-eaters" and save the last, wild magic in this dying land.